The 10th-anniversary, limited edition Joyetech ESPION Solo with the ProCore Air is a “sophisticated” vaping kit. Coming with an external 4000mAh AVB21700 battery.

The ProCore Air is an airy clearomizer covering from loose MTL to airy DTL vaping styles. It features a push-to-open top-replenishing design and comes with a newly introduced ProCA (0.4Ω) coil-head for balanced clouds and flavor. 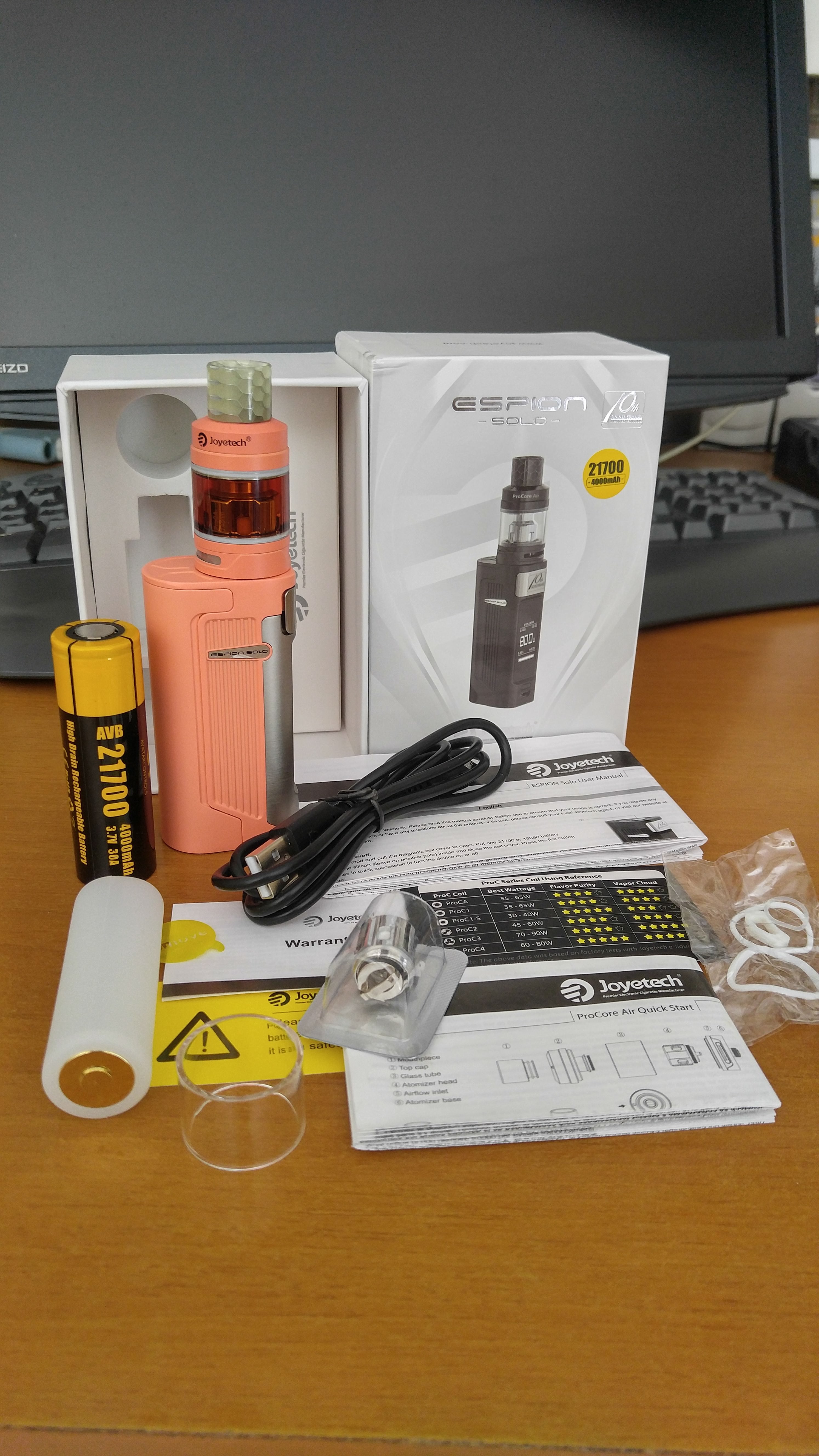 The name implies that it is a “refreshed” Espion with a “Solo” (single) battery.

Its ergonomic shape is tall and relatively narrow “rectangular” box with a half-cylindrical battery-cover door and other vertical edges just slightly rounded. This helps in comfortably holding it in your palm. The riffled-designed sides allow no-slipping fit in your hand.

Besides the included 21700-battery (remove the insulating sticker from its bottom, at first use), a 18650-battery can be used with the included silicone adaptor. It carries a spring-loaded 510-pole connector and takes up to 25 mm-diameter atomizers.

On the front face side

It’s a 1.3inch bright and clear B&W OLED touchscreen display, which is particularly responsive. Combined with an easy-to-use operating software-interface, it is convenient to make selections/adjustments with just your thumb. Either right-handed or left-handed.

Simply swipe the screen left or right to view the selections available and tap for adjustments. Mod turns on/off by 5 fire-button clicks. The touchscreen locks by clicking any button. For unlocking, press the function button.

On the main unlocked screen (either on power or temperature mode) you directly adjust wattage/temperature by tapping the up/down arrows. Then, swiping to the right reveals the left screen. Which is just information on the selected settings. Swiping to the left reveals the right screen of the operational menu. But, when you keep pressing the function button, it also scrolls through the modes.

It is equipped with Power/Bypass/TC (Ni, Ti, SS316) and TCR (with 3 storable values) operation modes. In the modes-selection screen, an RTC “mode” is also included, with a Real Time Clock just inserted in the screen of Power mode. Either as an analog or as a digital clock display (selecting “point” or “number”, respectively, on RTC selection menu). Swipe the screen to the right for checking your adjustments or to the left for entering the function-menu with MODE, SET, INFO, EXIT options. Tap icons to enter. Move down the SET screen to select PREHEAT for adjusting POWER and cut-off DURATION. In TC/TCR modes, tap SET for locking resistance and power.

When the mod is off, a fire-button click shows the clock:

Setting the clock is self-explained: first set the “hour”, then press the right arrow of the “hour”-frame to move to “minutes”/“year”/“month”/“day”.

Wattage change is performed at 0.1-watt increments below 20 watts only.

It also allows pass-through operation (vaping while charging), but it gets too hot when charging it with a 2A smartphone fast-charger. Very soon the “device too hot” message appears on the screen and the mod won’t fire-up (overheating protection).

Its name insinuates an airy clearomizer. It consists of five parts. It can easily be cleaned under running water.

It adopts the push-to-open top-filling design for easy replenishing the tank “on-the-go”.

The 4.5ml tank version is equipped with a chimney of noticeable height. This implies that it provides some “manipulation” of the produced vapour, targeting to flavour’s integration. It is a newly added coil-head in the ProC-series, made of Kanthal wire. It can be powered at a 40-80W range, offering a balance cloud/flavour experience at 55-65W.

For replacing coil-head, unscrew atomizer’s base, taking advantage of airflow ring’s stopper for a steady grip. Turning the tank upside-down, you can replace coil-head with liquid inside the tank, if liquid doesn’t exceed the chimney’s height.

As a single 21700-battery mod with a half-cylindrical battery-cover, it sits comfortably even in a small palm. It is not light-weight with the battery inside, but its weight gives a feel of holding a quality device. Its paint finish is excellent. The fire button is big, stretching out across the front-side of the mod and slightly around the sides, where it is also active. It doesn’t lock, so you have to turn the mod off to put it in your pocket. Ramp-up time is very short.

The screen is bright for being readable in daylight (not under direct sunlight, though). Touchscreen’s dimensions are the smallest possible for easy touchscreen operation. With its clever screen layout, it provides maximum usability with just your thumb. It is very responsive if you remove its protective film.

Note: Selecting to operate the mod in TC-SS mode with the included ProCA Kanthal-wire coil-head (a situation usual in case you don’t know the wire material of a coil-head). The “PROTECTION” message appeared on the screen substantially delayed the first time, followed by automatically switching to power mode.

It’s an airy sub-ohm clearomizer with a very wide wattage range of its included ProCA coil-head, optimized for covering the demands of cloud and flavour chasers.

The large size of the two opposite-positioned airflow slots of the bottom airflow ring, in combination with the large air-channel of the wide-bore BVC coil (6mm-diameter) of the ProCA coil-head, targets more to substantial vapour production with DTL vaping. But, it can also be adapted for loose MTL vaping.

The ProCA coil-head presents an extended lifespan. It’s a very fast liquid-saturated coil-head. It’s more suitable for 70/30 VG/PG liquids at 55-65W, for delivering flavorful clouds without over-flooding leakage from the airflow ring (better fire it for at least 2-3sec under intense DTL draws).

With MTL vaping, irrespective of the wattage or the included drip tip used, accumulation of vapour’s condensation soon appears underneath the drip tip. To somewhat reduce the effect, just elongate your draw after releasing the fire button.

The Joyetech Espion Solo is a rock-solid, ergonomically hand-feel regulated box mod. With a very good build quality and very easy operation due to its particularly responsive touchscreen and its self-explained interface software (easy to use menu).

It also stands out due to its small size for a 21700-battery mod, its fast ramp-up time, it’s responsive -on its sides- large fire button, its tight-fit battery cover design (no battery-door play). It also takes up to 25mm-diameter atomizers.